The hammerhead RNA sequence within satellite RNA genomes occurs at the
interface of two monomeric segments of a linear concatamer following rolling circle replication. Although it is, in that context, a single self-cleaving strand of RNA that is capable of catalyzing only a single, albeit highly specific, cleavage reaction, the hammerhead RNA can be artificially engineered to create a true multiple-turnover ribozyme simply by separating the molecule into discrete catalytic and target strands. The latter constructs have been studied in vitro and also correspond to hammerhead ribozyme sequences that have used in targeting other RNAs

Researchers at UC Santa Cruz discovered an RNA nuclease ribozyme design principle that enables targeting of pathogenic RNAs, such as those produced by HIV and other disease-causing organisms and conditions, with 50-fold greater activity than previously believed possible, and with over 90% cleavage efficiency.

The ribozyme is specifically designed to facilitate formation of an AU trans-Hoogsteen base pair that is both necessary and suffìcient for robust catalytic activity. Synthetic ribozymes designed according to these criteria are highly active and specific RNA nucleases, with signifìcant potential as in vitro or in vivo  biochemical reagents and as antiviral and anti-RNA therapeutic agents. 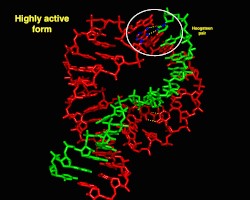